Wu Wei (Or: my friends are WELL talented, innit?)

Let’s just gloss over the fact that I haven’t posted in about 9 months. (Except to say this: no, I did not have a baby). Instead, let’s talk Wu Wei.

“What is Wu Wei?” I hear you ask. Well, the online dictionary (though not the OED, as that slammed its doors in my face once I stopped being a student), defines it thusly:

noun (in philosophical Taoism) action accomplishing its purpose in accordance with the natures of things and events.

So obviously that clears things up then.

Hmm? Still don’t get it? Well that’s OK. Because within the confines of this blog post, you don’t really need to “get it”, as such. All you really need to know is that Wu Wei is a new comics anthology, pulled together by the ever-industrious Mike Medaglia, with contributions all around the theme of spirituality. A very grown-up subject matter indeed, and one that has clearly been mulled over carefully by the various contributors. 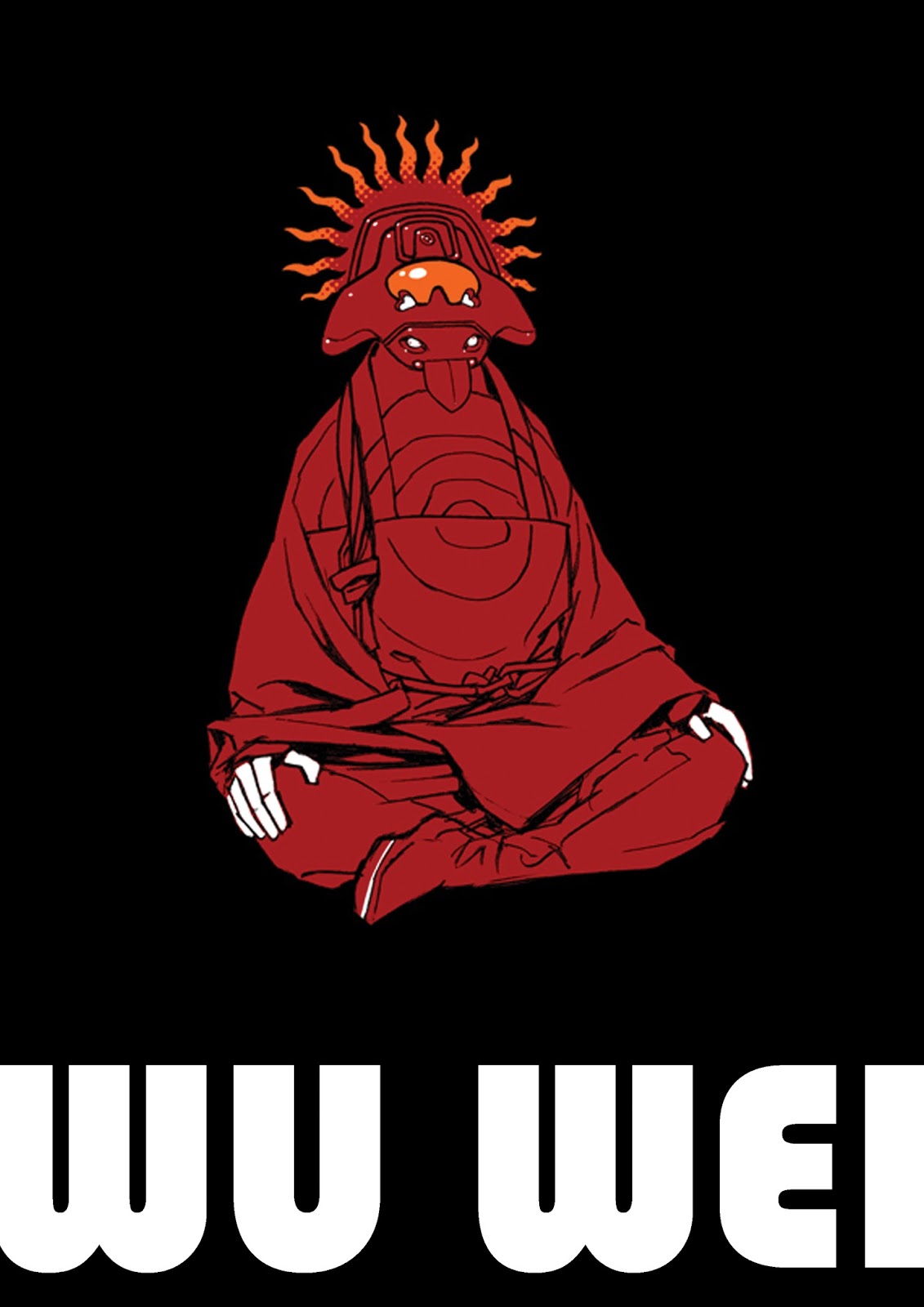 Contributions range from the quiet and contemplative (see Tim Hassan’s piece), to the visually arresting (Christian Ward's colourful centre page is just stunning), to the downright chortle-inducing (John Riordan. Meditato. ‘Nuff said). What becomes immediately clear when leafing through this beautiful book (and it really is beautiful) is just how personal “Wu Wei” is. Each interpretation is different. Each shines a little light on the creator. And each makes you think that little bit harder about what your take on “Wu Wei” might be. This is a book that is deeply contemplative, and inspiring of contemplation as a result. 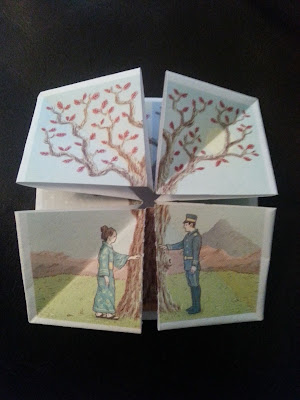 Nowhere is this clearer than with Andy Poyiadgi’s origami comic. When I was speaking to Mike about it, he said he hoped people would “take a quiet moment” to construct the comic, and I find it hard to imagine anyone doing otherwise. When I sat down to tackle mine, I found it required a certain kind of focus: prompting me to go into tunnel vision, shutting out everything else. By the time I had intricately pulled it together and could spend some time turning the corners to read it, I was in a pensive mood, taking in the beauty and sadness of the story with a new kind of absorption.

A similar experience washed over me as I read Howard Hardiman’s contribution to Wu Wei. Something about the repetition and the regular and reflecting lines lulled me into a different mode of reading than I’m used to. I didn’t charge through Wu Wei. I didn’t power my way through with the kind of voracious appetite that people associate with “page turners”. And in making me take the time to think about what I was reading, it was so much better and more valuable for it.

I wish I could take the time to talk through every wonderful contribution to Wu Wei, but that would be a very long blog post and I fear my fingers would fall off from all the typing. And it becomes very difficult to bake when you don’t have fingers.

SPEAKING OF BAKING (see what I did there?), whilst I was not a “contributor” to Wu Wei itself, I like to think I was a “contributor” to its birthing into the world. (…please immediately banish any mental images of someone birthing a book. I apologise for putting them out there). Here’s the deal: there was a launch party for Wu Wei last Friday at Gosh - the home of all good launch parties* - and I agreed to make a cake for it. A special, spiritual cake.

As a person who doesn’t, admittedly, think about spirituality a huge amount (sorry, I mostly think about comics and cake and nerdy things), the natural and most obvious direction for me to go in with this was a yin and yang cake. SORTED. And actually, bar a couple of slight obstacles, I think it turned out pretty well: 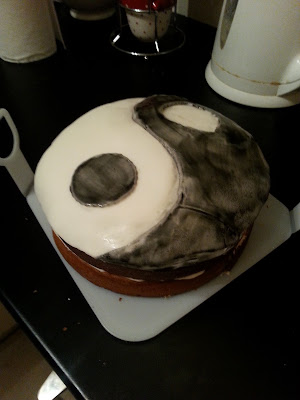 I decided to make life slightly complicated for myself, and rather than just ice it like the yin and yang, make it yin and yang all the way through – cakey innards and all. Because, you know…easy is boring, and all that jazz. So come with me now on a journey through time and space my cake crafting process.

Step one: Sketch out the cake in my brain. Who needs pen and paper? ...What’s that? Most sensible people, you say? PFFT, I say. PFFT. But for the sake of illustration, here’s what the sketching process in my brain looked like: 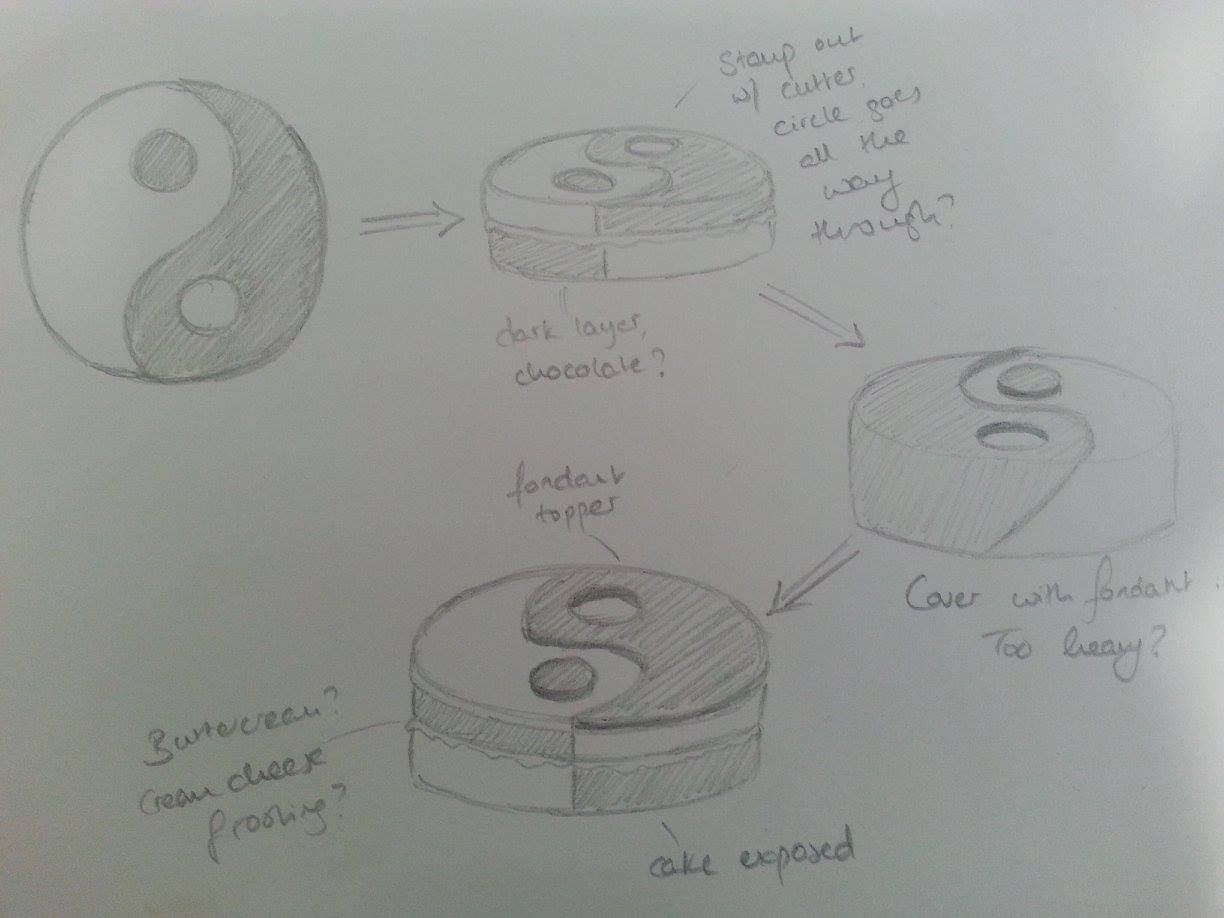 Step two: Pick a recipe. EASY. This one, from the trusty folks over at BBC Good Food, is one I’ve made before, and it always goes down well. Fret around for a while about how to adapt that recipe to make two different coloured cakes (the yin and the yang). Ultimately decide to add cocoa powder to one cake to make it dark (with some twiddling around with other ingredients for flavour and SCIENCE). 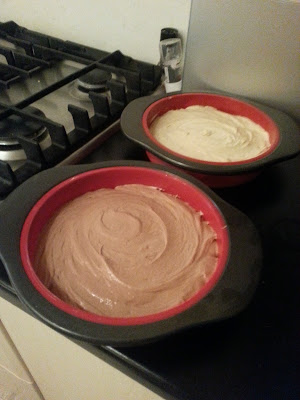 Step four: Whilst cakes are cooling, make a very sophisticated stencil from some fairly sturdy cardboard. Try to make the halves as even as possible. You could probably do this properly with the help of maths and stuff, but I gave up maths after GCSEs. I used my eyes instead, as they generally work out OK for me. 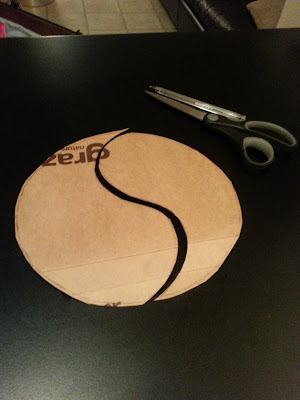 Step five: Delicately place stencil on top of cake(s) and slice around with a knife. This results in 4 (almost even) curvy halves. 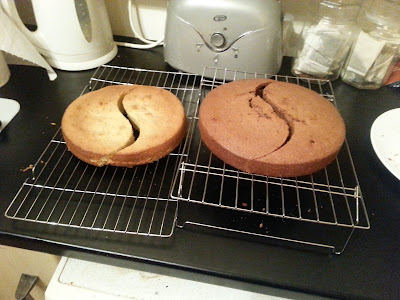 Step six: Whip up some tasty cream cheese frosting (thank you, Hummingbird Bakery) and use to sandwich together the bottom halves – one dark next to one light. Cover those with a layer of the frosting, then repeat the process (delicately, now) with the other two halves, placing them on top. Finally, use the rest of the frosting to cover the top of the cake. 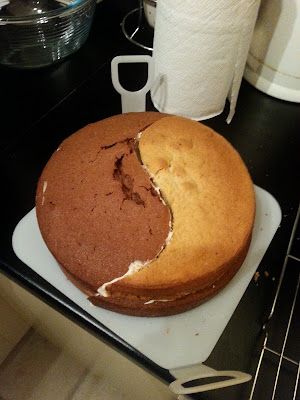 Step seven: Painstakingly roll out some regal icing, and use the aforementioned stencil to cut out a circular topper – a little bigger than the size of the cake tin, as it needs to droop down over the sides a TINY bit. Manhandle that onto the top of the cake without breaking anything.

Step eight: Using more rolled out regal icing, cut around the half-size stencil to create a yin/yang. Again, make it a little bigger than the stencil itself. Then use a cookie cutter to punch out a circle in the bulbous part of the yin/yang.

Step nine: Paint the punched out circle and the yin/yang (damnit, I’m going to have to research this now so I can stop writing yin/yang…hold on…)…the YIN with black food dye. This would’ve been a lot easier if the Little Waitrose on my way home from work deigned to sell black regal icing, but NO. Sigh. Various hours (and layers of food dye later), gently lift the painted icing onto the top of the cake, using a little water to stick the layers of icing together.

I managed to store the cake at work during the day without anyone from my office eating it (victory), and lugged it across to Gosh in the evening, where it lasted all of 5 minutes once I’d started cutting it up and serving it.

I think it went down well. At the very least, it was endorsed by Jack McInroy (one half of South London Hardcore) – a hard man to please:

Me: So? Was it alright then?
Jack: Yeah, it was really nice! I thought it was going to be too dense when I saw it…but no, it was nice!

High praise if ever I’ve heard it.

You can go and read all about Wu Wei over here, and have a look at some of the beautiful photos shot at the launch party by the very talented Mauricio Molizane De Souza here. And once you’ve done all that, you should really just go and buy the comic, shouldn’t you? I mean…come on now. That’s where this is heading, isn’t it? Best just to give in.


*except for ones that feature dinosaurs, goodie bags and theNatural History Museum
Posted by Jess Cave at 10:24