Yes, it has been a long time.

I can but apologise for the appalling delay between posts, and hope that the contents of this extra-special Comics & Cakery blog post will make up for the wait. Today, I present to you the ultimate marriage of my two favourite things: COMICAKE. 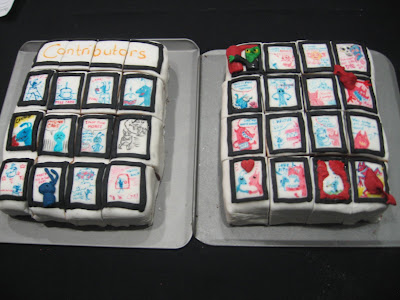 I cannot promise that this is the world's first comic-cum-cake creation, but it was certainly a first for me and - going by the conversations I had with the contributors - for them too.

Yesterday saw the second of Comica Festival's biannual Comikets for 2012, and it was quite the occasion. I had decided a while back that, as well as being the good little volunteer that I am, I would bring my own special brand of peculiarity to the November Comiket in the form of a comics-themed cake (or "Comicake", if you will). Unfortunately, in spite of having had the best of intentions, my hectic schedule and lack of preparedness meant that it was all a little ad hoc. I spent most of Friday making the cake (an insanely rich, dense chocolate cake from BBC GoodFood, which hopefully will not have given too many people diabetes) and painstakingly covering it with white sheet icing and small "panels" of black icing. The hope was that it would end up looking a bit like a double page spread of a comic. Thus, when I turned up at Comiket (having forewarned a few artists, but sadly not many), I was carting this with me: 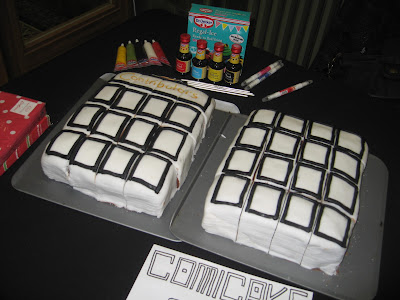 Not the easiest thing to get across London at 7 in the morning, I can tell you. Still, I managed to arrive with cake surprisingly intact. As I had managed to do so little in the way of forewarning artists, I was originally just going to ask each contributor to attempt a mini self portrait (or similar) to fill the pages. However, the wonderful Paul Gravett (part of the trio who run Team Comica, for those not in the know) was having none of that. "No! It must have narrative!" he cried.

...Or...well...maybe "cried" is a little strong. But he was very keen that some kind of story emerge, and in retrospect I am glad that he was.

The cake kicked off with Woodrow Phoenix, who got the ball rolling with a panel featuring his Pants Ant character. He, like many other artists on the day, chose to decorate with the wonderful double-ended Culpitt pens that I discovered in my local Whisk shop. Very handy tools that avoid lots of faffing about with fiddly icing tubes and piping. Here he is in action, beginning the Comicake masterpiece: 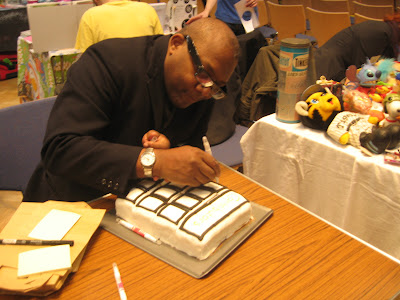 Throughout the course of the day I worked my way around the hall, gently (and not so gently) badgering kind-hearted souls to help create this collaborative, edible story. Rather than take you through the process panel-by-panel (a process, mind you, that lasted about 4 hours in total), here's a selection of photos taken throughout the day to capture the cake's evolution:

I just want to say a final thank you to everyone that took part, and helped me to indulge my love of comics and cakery. I hope I brought a little of the joy of cake making and decorating to the contributors, and that everyone who then went on to buy a piece of cake (bless you for that) enjoyed eating their part-art-part-dessert purchase!

Lord knows how I'll top this next time, but believe me - I'll try!

Here's that image of the final cake again, with a list of contributors below: