Another friend's birthday, another excuse for cakery.

Because my friend Jordan likes to travel, I decided that his birthday cake would have to be geographically themed. Perhaps somewhat rashly, I formed a plan that involved reproducing a map of Europe in baked form and marking all of the places that dearest J-Man has visited. Cue several worrying realisations about the level of my geographical savvy...

I came up with a plan that - whilst fiddly and probably quite time consuming - felt feasible. I found this lovely looking recipe on BBCGoodFood.com which promised to stay moist for 3-4 days (and frankly, anything with the word "ultimate" in the title feels likely to be a winner, no?). I've made Angela Nilsen cakes before, and they have invariably turned out nicely. Which is not to say that I wasn't a bit nervous about it: the trouble with making birthday cakes is that you can't test them before icing - a cake with a Jess-sized chunk missing might look slightly less than perfect...

Anywho, it didn't give me any trouble and looked quite pretty once I had taken it out of the oven and ganached it (a process that involved me making lots of fretting noises whilst trying not to burn cream in the pan). Voilà: cake avec ganache:


Whilst the ganache was setting in the fridge, I busied myself by getting ready for the party with plenty of time to spare (this is a barefaced lie: I actually spent an hour running around Ealing trying to locate regal icing and food dye). When it came to the icing, I lucked out by finding some ready-to-roll blue icing which I mixed with some white to give a fairly pleasing sea colour. 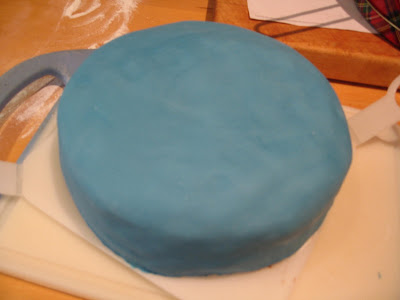 You should probably know that in preparation for this icing extravaganza I read several blog posts warning of "cake farts" - a pretty alarming prospect (and one that somewhat reassuringly comes from the cake, not the person eating the cake). I ended up following instructions from the very helpful "Inspired by Michelle" YouTube channel, and miraculously avoided creating flatulent baked goods. PHEW.

I made the countries for my map through a slightly long-winded process that involved: i) printing off a map of Europe, ii) tracing said map onto greaseproof paper, iii) dying and rolling out green icing, iv) laying my greaseproof map over the icing and stabbing around the lines with a toothpick, and finally v) cutting around the dotted lines on the icing with a knife. Below are snapshots of just a few steps from the rather finicky  experience: 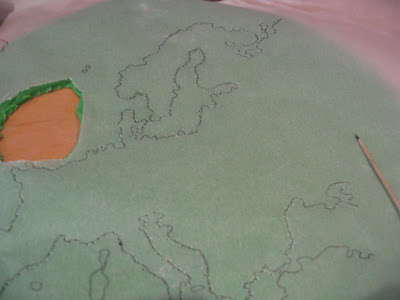 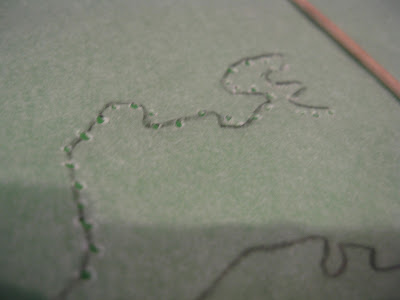 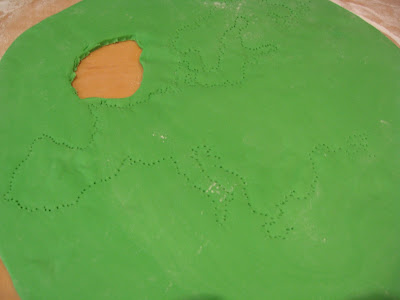 By the way, I have found that cake decorating is about 36 times more fun if done whilst listening to inappropriate music and singing/dancing around the kitchen. Just saying...

Right, so where was I? Oh yes, I know. So, I transferred the countries onto the cake (trying to put my Geography SAT knowledge to use in order to get them in the right position) and then made little flags out of toothpicks, stickers and tiny pictures of Jordan's face which I stuck haphazardly into locations I thought he'd been to (turns out there were 19 in Europe...NINETEEN). 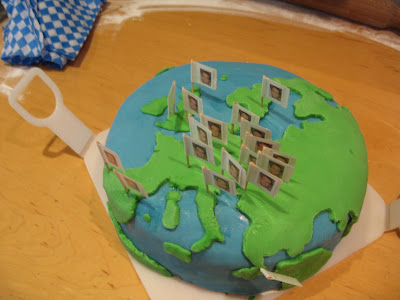 Somehow, I managed to get the cake from Ealing to Chalk Farm in one piece amidst the Olympics madness. (Seriously, I'm rather more proud of that fact than I am of the cake creation...) As I think can be seen in the pictures below, Jordan seemed to enjoy his cakey birthday treat - and a good thing too, as otherwise I would've had to cut off his supply. I am a harsh cake mistress, I'll tell you that now. 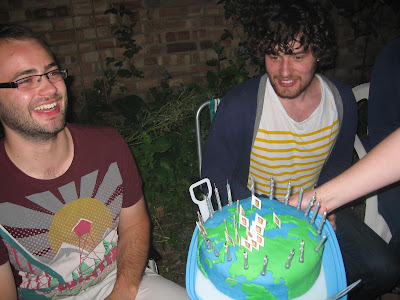 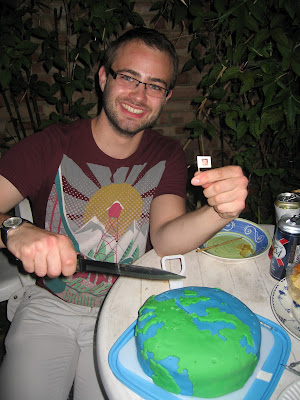 So my dears, there you have it: one European travel inspired birthday cake. Somewhat poignantly, it was my first proper decorated cake without the help of my partner in crime, Steph (she of the Fargo cake fame). I can only hope she'll be proudly looking on from dear old Brizzle...

p.s. As an added bonus, please enjoy this picture of my friend Ella merrily sneaking up behind me with a large knife: 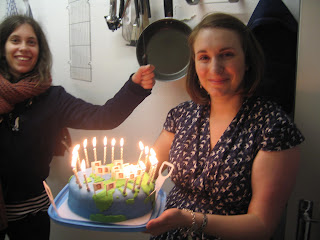